A Speech by Bonita 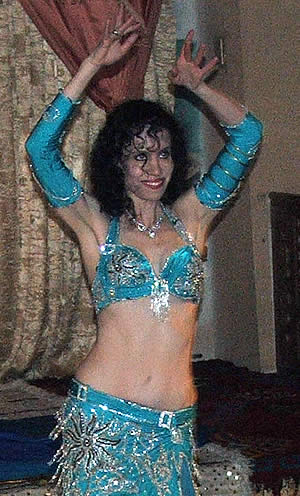 From the Author: I wrote the following speech to introduce my Christmas show to the Alexandria Branch of the American Association of University Women. Often when I dance for charities, the groups are interested in a short background history. Once in the early days of my career, I witnessed a negative reaction when I danced for some women who had preconceived notions about Middle Eastern Dancers. Since then, I have made it a personal crusade to educate the public on every possible occasion about the origins of our dance and to gently combat misconceptions.

I consider this dance a gift and a legacy of the ages to all women everywhere.

This is a dance that both literally and figuratively shimmers illusively behind many veils and has been many things to many peoples. These images have included fantasies such as the voluptuous harem girl who lives only to please her master, the glamorized Hollywood Salome dancing to tempt Herod into sin, the modern day scantily-clad oriental beauty shimmying her way through a James Bond Turkish movie scene… I'd like to take a few moments to look at the origins behind these veiled images…

Journeying back through the mists of time we can imagine an age before speech was known to man, and the body was the only available means of self-expression. Initially perhaps dances imitated the wonder of the natural world people saw around them. The grace of trees, branches swaying in the wind, the sinuous movements of the snake, the magnificence of a bird winging its way to greet the dawn…

Later as religions developed, archeological excavations reveal that dance was a ritual to celebrate festivals and honor deities. Today we celebrate Easter, Thanksgiving, and Xmas grateful for the blessings we receive year-round. Ancient peoples also gave thanks for the miraculous gifts of the Gods: An undying promise of eternal life symbolized in the annual rebirth and bounties harvested from the earth. And indeed the belly movements in Middle Eastern Dance originated in fertility celebrations of nature and were used to encourage laboring women during the birth process. Some religions today such as the Dervishes of the Sufi Islam sect still honor God through dance.

Archeological evidence of dance is found in ancient cultures all over the world. In the central Sahara, a feminine figure with arms raised to heaven in a worshipful attitude of dance was found to pre-date Pharaonic Egypt by 6000 years. This pose has been found in other ancient artifacts and ruins world wide.

As early as 1550 BC a professional caste of dancers originating from Pygmy nations apparently influenced Egyptian dance. Ancient Egypt temple paintings trace the dance from ritual dances of temple priests and priestesses to the time of Thutmose I and Hatshepsut, when acrobats, singers and musicians joined in the professional group of entertainers.

This dance was brought to Europe through conquering Ottoman Turks and also by the moors to Spain. Each nation of course influenced some aspects of Middle Eastern Dance, even as American culture has caused the dance to evolve in this country into some distinctive styles.

We western women of ten view Middle Eastern women as repressed behind their veils. But in dance, these women find release and freedom that is permissible within the confines of family and neighborhood. In Egypt, today a trance dance called the Zar is used by women to chase away evil spirits and bad luck. At weddings across the Middle East, young girls and grandmas dance. People of both sexes and all ages dance nearly anytime, anyplace. Like Zorba the Greek, they dance for the sheer joy and exuberance of life.

I dance for the same reason and in my performance I challenge you to see if you can recognize some of the ancient roots of this dance in my performance today; a glimpse of a ritual pose a priestess may have used to worship her Goddess on a cliff side in the moonlit temple courtyard by Homer's “wine dark sea”… or an Egyptian dancing girl flirting with the rowdy crowd in the marketplace… a fellow dancer once told me that our goal should be to take the audience somewhere they've never been. Ladies and gentlemen, I invite you now to join me on a journey back through the mists of time…

From the Editor: The author gives permission for any and all dancers to use this speech whenever they feel it is appropriate. It is Bonita's hope that this short speech can be used by other dancers to further public awareness of what Middle Eastern Dance is (and is not).

Middle Eastern Dance Reflections: A Bridge Across Time and Place

As our world struggles to evolve into a truly international community, rewards as well as challenges present themselves along the road to peace. Committed governments and national leaders strive bravely to make this dream a reality, often at the risk of severe political censure in their own countries. If this dream is ever to manifest as reality, we all must play a role in pushing aside road blocks, burying prejudice and sharing the common, shining spirit of humanity that has the power to transcend cultural differences.

Middle Eastern Dance, born of ancient traditions, presents a bridge across generations and cultures. My personal experience is a case in point. How did an Italian girl from Boston becomes a professional Middle Eastern Dancer? What fabulous cultural islands do I visit during my ongoing Odyssey? What does Middle Eastern Dance bring to the diverse cultures I briefly visit on my journey with what gifts of wisdom do I sail away? The answers to these questions, woven like colorful threads bind the Middle Eastern Dancer and the audience into a rich tapestry. Middle Eastern Dance affords us a trans-cultural bridge between our two worlds. The key to how this mystery happens, lies somewhere in the rich beauty, grace and rhythms of Middle Eastern Dance that captured my heart from the first, and has the power to call equally to international audiences, regardless of cultural origins.

The true spirit of the dance is to be found in traditional family celebrations, villages and cities throughout the Middle East. In America, this spirit thrives at places from New Jersey wedding receptions to the family partys in California. The dancing at these family festivities, joined by everyone from toddlers to grandparents, expresses that spirit of pure joy that all races and cultures instinctively know. This expression is a soul deep knowledge that in spite of life's problems and tragedies there is something wonderful and magical about the love, light and laughter God has gifted us with this on the Earth.

Embracing that joyful spirit, I try always to carry it to my audiences. While living in Europe I studied with teachers of many cultures, including Arabs and Europeans. Europe also affords the opportunity to perform for many cultures. The German audiences studied the dance with the deep seriousness of classroom students. Their respect for the dance was evident although I often felt like a university professor and almost expected them to take notes! Danish audiences, melted the bitter coldness of northern nights with their immediate acceptance and the warmth of their laughter. My fellow Italians, of course never need an excuse to be a loud, happy and enthusiastic audience. Spaniards, intensely passionate, related easily to the dance and music, perhaps due to the influence of Moorish-occupied Spain, and its echoes across the centuries still found in fiery, vibrant Flamenco music and dance.

I returned to America, fearful of American audiences and their preconceived notions of Middle Eastern Dance. I knew it would be challenging for a simple, ancient dance of happiness to capture the fleeting, complex attentions of stressed out business executives, soccer Moms and a generation raised on MacDonald's and MTV. However, even in this ultra-modern society, the trans-cultural bridge of Middle Eastern Dance served to cut across misconceptions.

In America, I have danced for elementary school students through senior citizens. The children saw a twirling cane dance as fun as their afternoon play in the snow. As I looked into their eyes, I saw that the senior citizens shared with the children the same light-hearted eternal youth that Middle Eastern Dance can bring out in all ages. The United States also presented opportunities to dance for Arab-American audiences for the first time. From Henna parties to New Year's Eve celebrations, it is a delight for the dancer to fly on the enthusiasm of parents teaching their children to clap out the correct rhythm and enjoy the music.

Like Middle Easterners, Indians have an ancient tradition of dance. These audiences were initially reserved and sometimes concerned that Grandma might not approve of Middle Eastern dancing. But again the dance bridged cultural communication gaps as a baby broke the ice by laughing uproariously when I played my zils under his nose. Cuter than the baby was little, Grandma, who having enjoyed the performance more than anyone, gave me a big hug at the end of the show. Conversely, Korean audiences had no such concerns of restraint. The men charged up to dance with me punctuating the rhythm with Tae Kwan Do chops and martial arts grunts. As I said Good Night the traditionally-dressed, embarrassed hostess confided “These people are normally very shy, you know.”

Finally, I must end the brief highlights of my continuing adventures with a special thanks to the Arab-Americans who brought this tremendous gift from the old world to the new. Whether Middle Eastern Dance is performed professionally or by the happy people I have seen at local family and church festivals, its inherent healing laughter and joy will long continue to be a bridge across time and place.